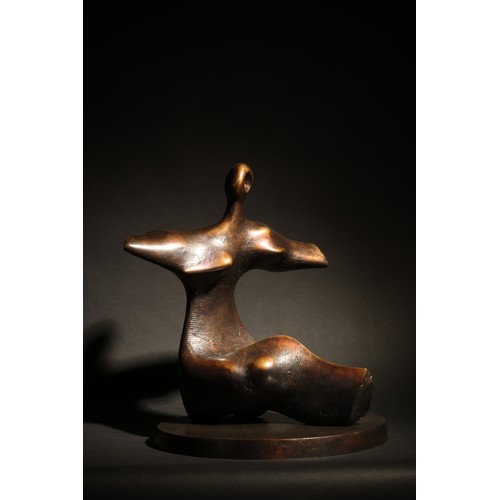 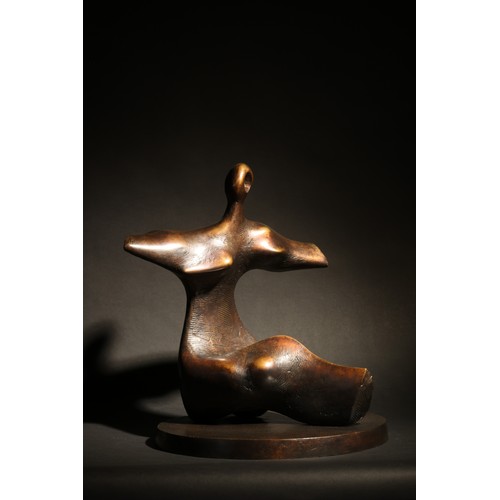 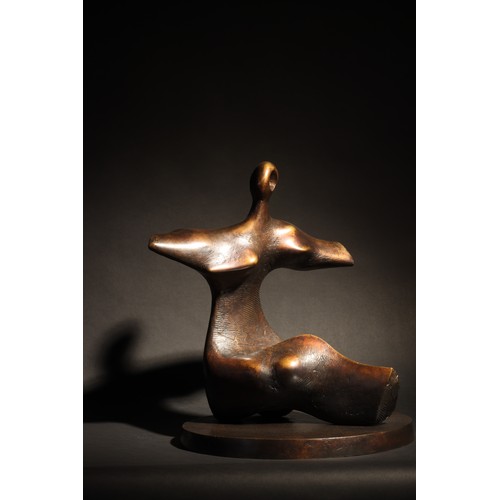 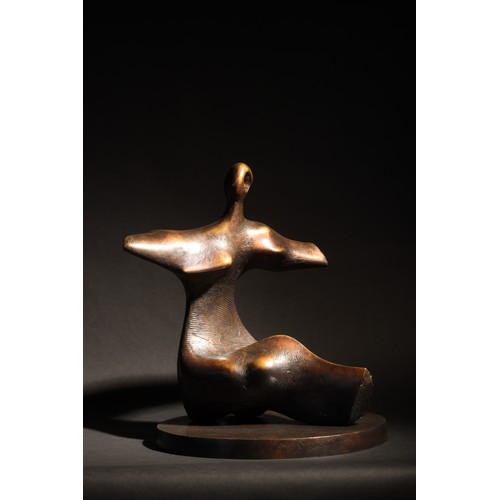 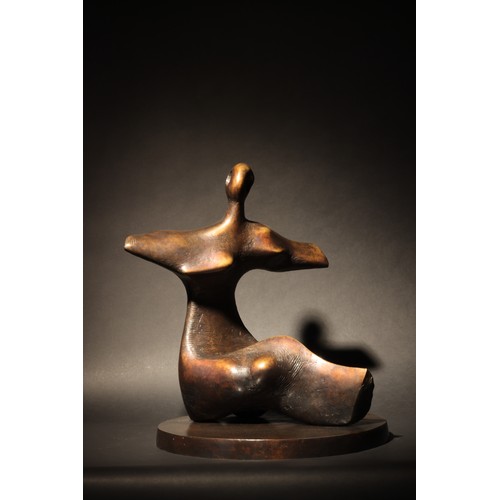 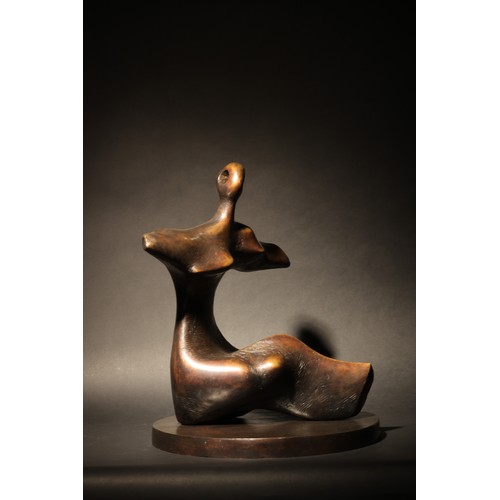 Conceived in 1960 and cast by the Fiorini Foundry, London in 1984 in a numbered edition of 9 plus 1 artist's proof
Cast numbered 6/9

Property of a Distinguished Gentleman of Title.

Dimensions:
Height (including base): 62 cm

Lot Essay:
The human figure was Henry Moore’s abiding passion and the primary subject of his art. Working Model for Seated Figure: Arms Outstretched, conceived in 1960, belongs to a series of sculptures that Moore created in the 1960s that occupies a key position in his oeuvre.


Paul Cézanne, Bather With Outstretched Arms, 1878, Oil on Canvas, Private Collection.
The influence of Cézanne on Moore’s work is particularly apparent in the present sculpture. Reflecting on his lifelong passion for Cézanne’s work and its importance to him, Moore wrote with particular reference to Les Grandes baigneuses: “Cézanne’s figures had a monumentality about them that I liked. In his Bathers, the figures were very sculptural in the sense of being big blocks and not a lot of surface detail about them. They are indeed monumental but this doesn’t mean fat. It is difficult to explain this difference but you can recognise a kind of strength. This is a quality which you see only if you are sensitive to it. It’s to do with the full realisation of the three-dimensional form; colour change comes into that too, but not so importantly as human perspective. Bathers is an emotional painting but not in a sentimental way. Cézanne had an enormous influence on everyone in that period, there was a change in attitudes to art. People found him disturbing because they didn’t like their existing ideas being challenged and overturned. Cézanne was probably the key figure in my lifetime” (quoted in Alan Wilkinson, ed., Henry Moore, Writings and Conversations, Lund Humphries, 2002, pp. 150–51).

In 1959, a year before the conception of the present work, Moore managed to acquire for himself one of Cézanne’s paintings of bathers, later declaring, "It's the only picture I ever wanted to own. It's...the joy of my life. I saw it [in 1959] in an exhibition and was stunned by it. I didn't sleep for two or three nights trying to decide whether to [buy it]...To me it's marvellous. Monumental." (quoted in Monitor, first broadcast in 1960).
The figures in Moore's sculptures rarely engage in gestures of extrovert display. Mothers may embrace or cradle their children, but Moore's single figures, in their typically seated or reclining positions, usually hold their arms close to their sides, or angle them to support their bodies. This lack of gesture does not necessarily imply an emotional aloofness on the part of the sculptor, rather it relates to the significant structural difficulties in carving or casting a fully extended or raised arm as part of a sizeable sculpture--the arms, together with the ankles, are often the most fragile parts of a standing figure. Given the large, block-like mass of most Moore sculptures, which the sculptor related to landscape forms, a raised or extended arm should be a rarity, and so it is in Moore's oeuvre--the present Working Model for Seated Figure: Arms Outstretched is the only major Moore sculpture that exhibits this gesture. Without hands, the emotional context of the woman's gesticulation is ambiguous, and probably intentionally so. She may be engaged in an act of lamentation, or quite the opposite: she may be prepared to warmly greet and even embrace the approaching viewer, eager to engage in a spirited conversation while gesturing with her arms.

Moore is known to have admired an Arawak Indian bird man from Jamaica in the collection of the British Museum, a figure with the body of a man and the head and beak of a bird, with outstretched arm that act as wings (fig. 1). "What I liked about this," he wrote, "is the way the sculpture was built up in divisions, lump upon lump, as though it were breathing in matter, up from the toes, along the arms from the fingers, into the great swelling chest" (quoted in D. Finn, Henry Moore at the British Museum, New York, 1981, p. 117). Although Seated Figure: Arms Outstretched does not actually exhibit the same "lump by lump" manner of construction, the alternate swellings and constrictions of form along the course of the figure generate a similarly powerful effect. The truncated legs take on more mass at the hips, then grow narrower at the waist, and finally expand most broadly at the upper body and arms to make them the most salient features of the sculpture. Moore extended the central horizontal axis of the arms across the ledge-like overhang of her breasts, more pronounced in this working model than in the smaller maquette done in 1960, which emphasises the rising gesture that characterises this sculpture, in contrast to the earthbound weightiness one ordinarily associates with Moore's figures.

No less striking and unusual than the outstretched arms in this Seated Figure is the large hole in her head. Moore frequently defined the faces of his figures with a pair of small, shallow holes for eyes, or with a single sizeable concavity, as if the face were simply a mouth only. There is an opening under the beak of the Arawak Birdman. To pierce the head of the woman with such a large, gaping hole, making it like the huge eye of a needle, is an extreme but effective measure that opens up the sculpture, while adding a further note of uncertainty concerning the woman's emotional state and the nature of her expression. Moore wrote, "For me the hole is not just a round hole. It is the penetration though the front of the block to the back. This was for me a great revelation, a great mental effort... The hole as form--there is as much shape in a hole as in a lump...There's no doubt a deep psychological explanation of the fascination of the hole" (quoted in A. Wilkinson, ed., Henry Moore: Writings and Conversations, Berkeley 2002, pp. 206 and 207). 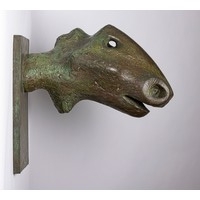 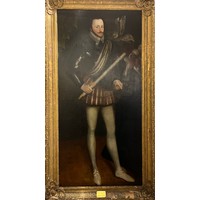